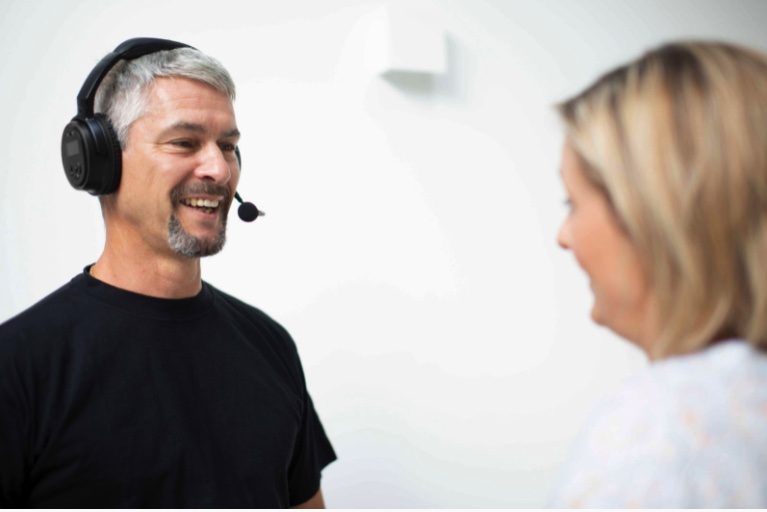 Historically, it has taken the dedicated and fully committed singer 7 to 10 years of performing combined with ongoing serious study with a master teacher to become a virtuoso. A virtuosos has mastery over their voice under all conditions and will never have a vocal issue. Once achieved, you will always sound fully yourself, authentic, relaxed, natural and unique. without ever forcing or over-exerting, ever.

I went this route. It took me well over 10 years from professional acting school and then finding a master singing teacher and spending years in the voice studio and performing to become a virtuoso.  Why did it take so long?

This is a piece from my 1993 one man show in New York City entitled, “Love, Desire and Growing Pains” at the Avalon Theater. It will give you a sense of what I teach.

I had some unresolved trauma that prevented me from using my emotional muscles and expression system, what I call the singer’s muscles, to maximum potential.  I had some rehabilitation to accomplish before I regained the natural ease that Nature intends for our vocal apparatus and expression system.  Sophisticated, skilled bodywork and intrinsic exercise conditioning is key, as well as training in the audio-vocal loop, or the right ears ability to control your voice (voice production).

I will get to the point!

Today, I train singers & actors to find the voice that Nature intends for them that is unique and like no-one else’s. I do this by first assessing their listening profile.  A listening profile is a picture of how you listen (way more than simply hearing). Below is Dr. Alfred Tomatis (ear, nose and throat doctor (ENT)) many decades experience of working with professional singers.  The top “Balanced Curves” show someone’s listening profile that has an ease of expression and a good balance between how they hear their own voice through the air (tympanic membrane) and how they perceive their own voice in their skeleton (bone conduction and the basis of your authentic voice). This is called bone conduction (red line) and it 10 times faster that what we hear through the air. It is therefore the basis of your voice and most of us must be trained how to discover it and master it. 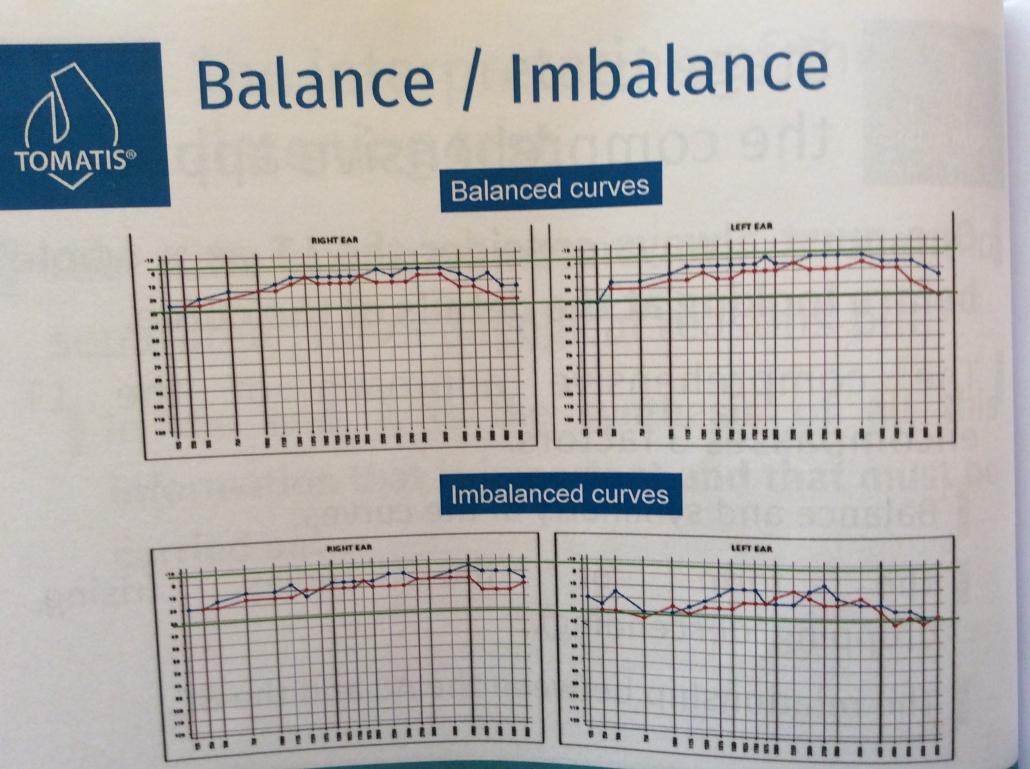 If it is not in a good functioning relationship (balanced curves) to the air conduction (blue line); it will cause distortions in ability to listening, sing, memorize, maintain composure, somatic awareness, and ease while reforming and much more.

The lower listening profile (imbalanced curves) shows a person who has distortions in their air and bone conduction relationship and so this will reduce the power of their performance.

I do a Tomatis® Listening Assessment with all my clients, to discover what is natively happening in their listening and therefore vocal production capabilities.  And with a comprehensive intake history and clear goals of the student, we can proceed to clear the distortions that have been acquired unconsciously since infancy and that would take years to transcend, if at all.

With the Tomatis Listening Training and electronically modified active singing work, the student will begin to have a direct and immediate experience of their authentic singing voice that would otherwise take years of very slow progress. It is a rare person who  has the native ability to just get up and sing in front of an audience, where they will never cause themselves a vocal problem after a tiring schedule. When the pressure is on you all the time, many singers default to force and tension; this will always lead to a shut down of the larynx since it must be fully relaxed at all times to function at its peak.

The Tomatis® Method for ear training for singers is a multi-decades proven, unique, and powerful approach of sound-sensory training. Sound is transmitted, on the one hand, by bone conduction caused by a vibration in the skeleton and the upper part of the cranium, and on the other hand, by air conduction passing through the ear (tympanic membrane). The sounds we use in our devices (called TalksUp®) have been preliminarily adapted with the Tomatis® effect, and thus train the entire inner ear, including the aspects that affect both auditory and motor functions. The sound initiates first in the tympanic area, and then via bone conduction, triggering a reflex that both engages and relaxes the two muscles known as the stirrup and hammer muscles. This effect is obtained by means of a perceptual sound contrast (a two-fold alternation of timbre and intensity) intended to “surprise” and thus train the ear.  It is essentially exercising these muscles that control the ability to listening well.

As an effect of the vibration caused by the sounds, these muscles will in turn stimulate the aspects of the inner ear known as the cochlea and the vestibule. The cochlea is lined with tiny cells called hair cells, whose purpose is to convert this vibration into electrical stimuli. These stimuli will then feed a vast neural network known as the reticular formation, which controls the overall level of cerebral activity. In other words, the cochlea and vestibule energize the brain; we say that it has a function of “cortical charging.”

Moreover, the vestibule informs the brain of the tiniest bodily movements and therefore has an effect on rhythm and balance. The coherence of the message that it transmits is thus fundamental. The ear must therefore be effectively stimulated.

IMPROVEMENT OF THE SINGING VOICE AND THE SPEAKING VOICE

The improvement of the speaking and singing voice can be considered as an historical leap in the application of the Tomatis method.

It was when practicing in occupational medicine that Doctor Tomatis came to make the discoveries which now bear his name and which concern the links between phonation (speech production) and hearing. He demonstrated that it was possible to correct either one of these essential functions.

Tomatis’s principles can be stated as follows:

2. If the hearing is modified, the voice is immediately and unconsciously modified permanently.

For Tomatis, a quality vocal emission not only requires good listening to the acoustic message coming from the outside, but also and especially good self-listening, that is to say the ability to use one’s own voice as the sound source to be analyzed and controlled in terms of accuracy, intensity and quality.

This self-listening is possible, provided that the perceived sound vibration is correctly regulated through bone conduction, the transmission of sound by all the bones in the body and in particular by the skull. Bone conduction occurs 10 times faster than conduction of sound through air. This is significant.

This bone regulation itself depends on the harmonious functioning of two muscles situated in the middle ear, whose role is to control and absorb all of the vibrations transmitted to the inner ear.

The purpose of audio vocal re-education under the electronic ear (TalksUp device) is precisely to implement a mechanism of quality self-control.

Thus, depending on the vocal problem being dealt with, the action of this procedure can focus on:

The term “Audio-Psycho-Phonology” implies that psychological factors mediate between (a) the acoustic waves that the ear receives and decodes, and (b) phonation and speech.

There is an important distinction between hearing and listening: Hearing means that the ear passively receives the acoustic signal regardless of whether the person is awake or asleep. Listening or “active, or determined, selective listening” means that the ear is able to focus its auditory attention and to select to listen to only those sounds that interest the individual, from the variety of environmental sounds that reach it. For example,  a musician who choses to listen to he melody line verses the rhythm section of a musical piece of the singer who choses to sing the harmony rather than the melody line of a piece of music.

The Tomatis method was developed by Alfred Tomatis (1920-2001), a French otorhinolaryngologist. Alfred Tomatis devoted a considerable part of his career to the study of the relationship between the ear and the voice, and by extension, between listening and communication. The term “Audio-Psycho-Phonology” was introduced by professor Tomatis, who developed a system of auditory stimulation designed to improve the function of the ear as an organ of listening, understanding and communication.

Professor Tomatis’ discoveries were validated at the physiology laboratory at the Sorbonne and were presented to the Academy of Sciences and Academy of Medicine in Paris in 1957 and 1960. The papers he presented defined the “Tomatis laws”, stated as follows:

Certified Level 2 Practitioner of the Tomatis® Method: I offer the  Tomatis® Listening Assessment which is a sophisticated analysis of your bone and air condition and a number of other parameters that provide a picture of how your ear in interacting with your voice production.